So You Want to DM

Congratulations! If you are reading this, then this means you have taken upon the mantle of Dungeon Master, or as I like to call it – god. DMs and their kind are responsible for helping create the boundless worlds that your players interact and believe in. Mind you, being DM isn’t an easy task. At times, it’s often thankless and time consuming but the effort and interest you have in managing a game will be worth the effort. Hopefully, I can pass tips and tricks from my experience to help you out.

(I wrote this article rather hastily!) 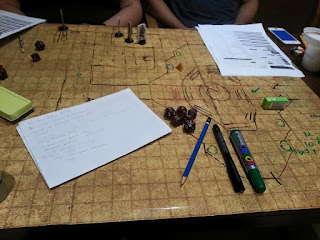 Why Should You Dungeon Master?
To put it simply…being a DM is fun. Your actions and ideas help players believe that a grid marked paper is actually a sprawling urban landscape set in a dystopian future or even a fantasy world populated by dragons, magic, and elves! There is no training to become a DM. Sure, there are plenty of references available on the internet but you will have to practice. In the beginning, you’re going to suck. That’s the simple truth. No DM worth their salt has managed to pull off an amazing session on their first try. You’ll have sessions where a combination of RP and unexpected player based choices resulted in a memorable experience! But you have to keep this in mind – each session is another attempt. Don’t be hard on yourself.

How can you prepare to be a DM?
Well, picking a system and setting that you’re familiar with is a great place to start. You’ll have plenty of references and resources to pull upon to supplement your games. A good way to understand a game’s mechanics is if you can simply explain to yourself. Obviously, this doesn’t mean you have to remember EVERY important mechanic and errata that a particular system has. Chances are, you’ll learn how to play the game as you DM and your players should be patient and understand this.

The Hook
Now that you have an idea of what you want to run…the next question is – how do I get my player’s involved? I found the best way to get players involved in my game was to give them small exposition and then introduce the danger. Here are two examples:

It has been a week since you were traveling with your companions. It begins to rain. Your caravan breaks down. Looking outside, the nearest town seems several hours away. A growling can be heard in the distance. What do you?

It was a scorching summer day in Havana, and your team of Shadowrunners had holed up at the local stuffer shack trying to escape the heat. You were waiting for a lead about a potential job offer when a loud screeching breaks the hum of the air conditioner. A neon green motorcycle breaks through the patio window, impacting itself upon the counter, shredding both clerk and rider into giblets. The few patrons scramble and try to find their way out. Moments later, a small group of thugs enter the building, guns drawn. The largest of them points at you and your friends, “Slag them!”
Example two works the best because it introduces danger, setting and forces the players to react immediately. If given too much freedom and time, the players will waste time forming plans when the solution can be solved simply. Mind you, every scene or situation won’t play out like an action movie with explosions and gunfire (unless you want it to). You’ll have to find the right balance of information and threat.

Information Overload
As DM’s, our worlds can be so damn interesting that we want our players to explore every inch and absorb the lore. Frankly, your players will most likely be interested in what spells and attacks kill monsters quickly. Don’t take it personal. Each player has a reason for playing.
A problem that I found when DMing was how much information was presented. Think of DMing as teaching. More often than not, people don’t want to sit through a lecture. Keep things simple. Here are two examples of a scene’s exposition. Tell me which one works the best:

Dark heavy clouds obscure the waning moons light which gave the angels and moss laden tombstones a feeling of dread. As your party wandered deep within the graveyard, it became clear that this place was forgotten by time. The Baron’s care for his city died when his wife was stolen by that terrible beast. Driven by madness, the Baron fled his station on that very day.  Your party recalls that the Baron’s family mausoleum lay ahead. As you drew near, a trail of blood leads you to the mausoleum.

2.       On a quest to find the Baron and make him answer for his disappearance, your party guided by what little moonlight remained had ventured within the graveyard. As you drew near the mausoleum, your party found a trail of blood. It was fresh.

Let’s take a look at these two examples. Example 1 wastes too much time describing the graveyard. Use simpler words and descriptions to convey an idea across which is why Example 2 works the best.

Oh…this is tricky. Combat tends to be the one area that most DM’s falter. To make things easier, I’m going to break this down into smaller sections.

1.       Initiative: You should have your monster’s initiatives recorded for ease of use. What you should do is make note cards for your players and the monsters. Without having to worry, just move the ticker so that you can actively track who is next.
2.
Turns: For the love of God, some players LOVE to play tactical and plan all these different moves. Each round of combat should technically be 6 seconds, meaning that Jimbob the Monster slayer isn’t going to move 10ft or 20ft if the monster wants to eat him, shoot a crossbow, reload, or throw a bomb all in one turn. Have your players THINK about what they want to do BEFORE their turn comes up. This goes double for casters.
3. 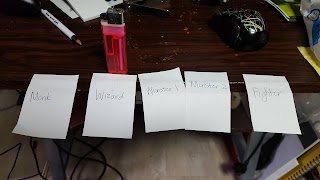 PREP, PREP, PREP: I
can’t say this enough.
Please, as a DM, have your monsters, traps and pertinent information bookmarked,  noted, and easy to reference. Nothing kills the game’s flow than having to reference rules or states.
Chances are, you’ll be making stuff up on the fly. If you’re a good bullshitter, it won’t matter much.
For tracking monster damage, I like to use tally marks since it’s easier than doing math. 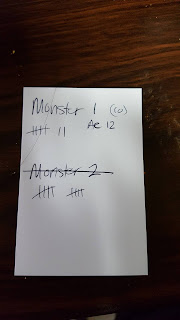 Hopefully, these tips will help give you an idea of what to do in your future games. Mind you, the rules are a guideline – meaning, you DON’T have to follow the rules. Remember to have fun with your party and good luck!

Posted by Unknown at 1:47 AM No comments: